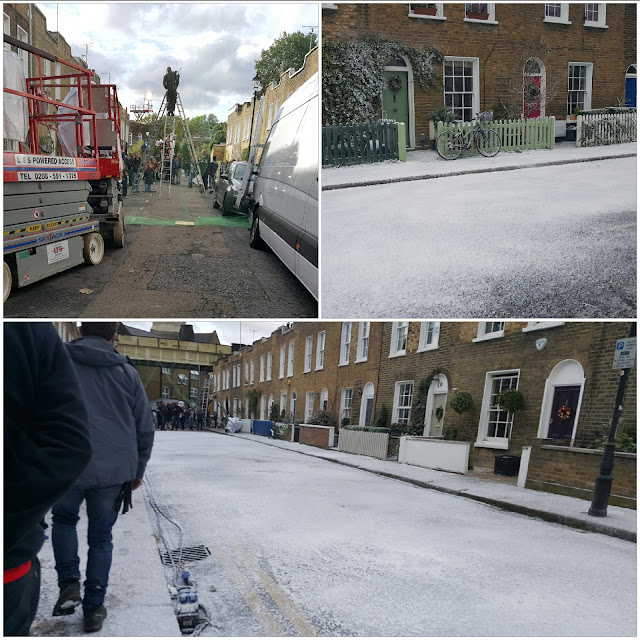 You might not know that I have my animals signed up with an agent for media work. I have been working the animals for about 12 years or so.

Sweep got the call for 2 days filming in London for a Christmas advert - I never say anything at the time as am not sure what I can and can't say so it's best not to say anything!  Now the advert is out I can tell you it was for Quality Street. I was pleased to hear it was a 2 o'clock start so we missed rush hour traffic into London which can be horrendous.

These things sound glamorous but they are far from it, there is an awful lot of waiting around and standing about in the cold.  Sweep didn't actually get called onto set till about 5pm on the first day and nearer 6pm on the second day.

We had been training him to jump and catch sweet wrappers falling from above but they changed the plan on the day - another thing that happens quite frequently - you can prepare yourself and your animal as much as you can but on the day it can all change and you have to be prepared for this.

I had been concerned about how slippy it would be if he was jumping, they were using pretend snow but it wasn't slippy at all - it was a paper substance not wet at all, completely dry.

Instead of him jumping at the sweet wrappers they wanted him to run into set towards the actors and then to start jumping at the wrappers - I did say I couldn't see him doing this as I had to hide behind a hedge so he is hardly going to know what to do.  So I let them see what would happen as this is usually the best way to give it a go and then they can see for themselves.  I got Sweep to run on to set and run about a bit but I couldn't get him jumping at the wrappers from a distance - the wrappers were floating slowly in the air and it wasn't that easy to see them.  So I got them to stand me on a box rather precariously just out of shot and I could then get him to jump at his target stick.

The other shot was that he had to walk off lead down a street with an actor so we loaded him with sausage and a tennis ball, Sweep was happy enough to go off with him then!  They wanted him running in the street happily doing his own thing but near enough to the actor, the actor was squeaking his ball in the pocket so Sweep easily ran round excited then!

Sweep was a good boy and worked well, he is completely focused and despite all the commotion going on round him he concentrated all evening.

This is the actual advert, watch out for it, I believe it has been shown quite a few times between prime time programmes:


Then there is the behind the scenes video which shows a bit more of Sweep and of myself and Mark who came with me to give me a hand: