I have recently started driving the 2.0 tdi Volkswagen Tiguan, S model which is the basic model. 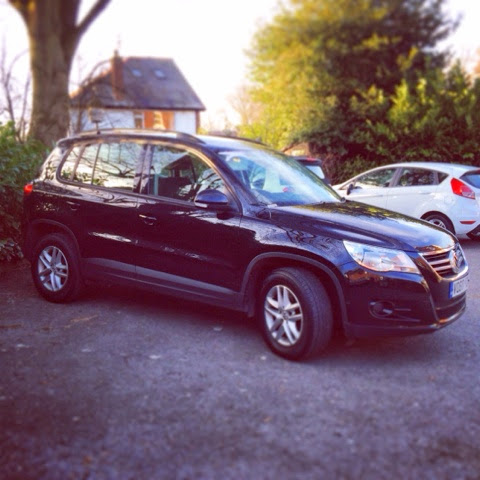 I have to say what a great car, I would have liked the 4 wheel drive version but ended up with the 2 wheel version and am really pleased with it. I saw one at Crufts and had a sit in it, had always liked the look of them but this spurred me on to try one!

It handles really well, a lot of 4x4s I am not keen on as they feel like a boat around the corners! It's why I loved the Porsche Cayenne as it handled like a dream! It's because it's not as high as some of the 4x4s, which I like, it's a perfect height to get in and out of and to get the car seat in and out of too.

The boot isn't huge, probably average for a large hatchback however you can move the rear seats forward and make it a lot bigger which is then plenty big enough for the dog and pushchair :).

The 2 litre diesel is really nippy yet still really economical as I am getting near enough 50mpg just for short journeys. Tax isn't bad at about £70 for 6 months.

I love it, I really do and would like the R line 4 wheel drive version when I can afford it! It's economical enough to be a good run around and practical enough to be taking the dog for walks etc. best of both worlds!
Posted by Unknown at 11:52 No comments:

I was invited by Mumsnet to review Jim Crace's Booker Prize shortlisted novel 'Harvest.' I jumped at the chance as I don't read enough and this would encourage me to sit down and do so. It isn't my usual type of book as I normally like a good thriller, crime etc. However I was willing to give it a chance. 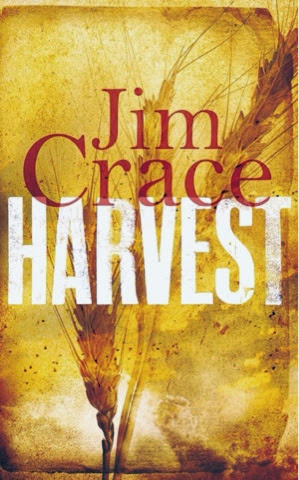 The blurb reads: 'As late summer steals in and the final pearls of barley are gleaned, a village comes under threat. A trio of outsiders - two men and a dangerously magnetic woman - arrives on the woodland borders and puts up a make-shift camp. That same night, the local manor house is set on fire. Over the course of seven days, Walter Thirsk sees his hamlet unmade: the harvest blackened by smoke and fear, the new arrivals cruelly punished, and his neighbours held captive on suspicion of witchcraft. But something even darker is at the heart of his story, and he will be the only man left to tell it...'

The story is told by Walter Thirsk who is a villager but wasn't born in the village unlike some of the others. He seems to still be thought of as a bit of an outsider.

I was open to reading a different type of book but I really couldn't get to grips with the style it is written in. It is a very descriptive, poetic style of writing and for me I got bored and just thought 'get to the point!'

"It's not that Mr Quill is a handsome or well-built man, though his seeming wealth and kindness are bound to be attractive. Nor is there any sense that Mr Quill himself is bidding for a bride. It's just that this procedure has tows and currents which would not trouble us if every daughter in the line had yet to grow her breasts. The fathers there are both awkward and seduced themselves."

It is a very challenging read and personally when I read a book it is to relax a bit having either had a hard day at work or having entertained my young daughter all day. The last thing I want to do is have to really concentrate on reading a book. Perhaps a read for someone who is retired and can spend the time reading.


Disclaimer: I was provided with a free copy of ‘Harvest’ by Jim Crace for this review. Please note the opinions are my own.

We arrived at the small airport on Sal and went straight through passport control as we had Macy. Our luggage was a different story and typically ours was last through, as a result we were the last for our coach which had filled up and gone so we had to wait for another. By the time we had reached the resort most people from the earlier coach had been checked in so we didn't have to wait long. We were transported down to our room via golf buggy which Macy loved!

Accommodation
We had booked a two bedroom suite and were upgraded to a two storey three bedroom, three bathroom villa with private pool.  Fantastic accommodation with a little garden for private sunbathing, two balconies, one large enough for several sunbeds. A tv in the master bedroom and lounge. Well equipped kitchen with microwave, fridge, dishwasher, kettle. The only thing I would fault was the pool was cold, only my mum was brave enough for a swim, Macy screamed as soon as her feet hit the water!  Here is a walk through of our villa:

Bars
There are several bars, the O'Grille beach bar (beautiful at sunset when a DJ is playing) and a poolside swim up bar, both of which serve your regular drinks and cocktails. Then there is Sway Lobby Bar which is the piano bar by reception, they don't serve everything the other two do - no cocktails or diet coke. Finally the Late Bar which is adults only so we didn't go in.

Spices
This is the main restaurant situated just by reception, it is a big buffet restaurant and you don't need a reservation.
Breakfast - massive selection of food. You have the German cheeses and salamis, French croissant and pastries, English full English, lots of fruits, cereals, pancakes, omlettes made to order. Brilliant selection and good food.
Lunch - huge selection of salads and other hot foods like casseroles and fish. Pasta can be made to order. Lots of different cakes for dessert.
Dinner - similar to lunch but fewer salads. What I would say is there is a lot of meat on the bone which I don't like so even with avoiding those dishes I still had enough choice. Every night had a different theme.
Waterside
This restaurant is situated by the pool in the middle of the complex. It can get a little cold and night as one side is open which is lovely during the day. It is open for breakfast, snacks during the day and dinner (you need to book but can probably get a reservation for the same day).
Breakfast - this is basically a cut down menu of the buffet restaurant. There is a small selection of typical English, German and French breakfasts.
Lunch - consists of pizza, a couple of stews and rice and some salad.
Dinner - this is a fish restaurant and everything on the menu was fish. Out of four choices for starters we had chosen what we wanted only to be told no we get a bit of everything. A bit disappointing as we didn't like the octopus or the sushi so ended up not have much for our starter. For mains there was a choice of four dishes and we all had the cracked black pepper which was beautiful. For dessert, again you couldn't chose and had both options on the menu, a coffee and a chocolate cake which was a bit dry.
All in all it was nice to try once but unless you're a lover of fish you're probably better off with the other restaurants.

O'Grille
The restaurant has the beach bar attached, situated right on the beach with the front all open, so it is a little chilly at night. There is complimentary ice cream which you can help yourself to throughout the day.
Breakfast is served late and consists of sandwich rolls, bread, fruit and cake.
Lunch gets busy and you usually have to give your table number and wait a little which isn't a problem as you can be enjoying cocktails at the bar. Its the only restaurant at lunch time which is waitress service and not buffet. The menu consists of burgers, steaks, salads and pasta, it is good food and the atmosphere is lovely.
Dinner comprised of three different set menus but you could mix and match courses from each. There was a good variety to choose from so there should be something for everyone. Everything was cooked perfectly and presented nicely. A saxophonist played while we enjoyed dinner.

Aqua
The restaurant is only open for dinner and is the smallest so gets booked up quickly. It is inside by the piano bar and has a mediterranean feel.
There are two set menus which consist of Mezze (sharing platters) and you can decide whether you want meat or seafood. We decided on meat. The starters were lovely, 3 hot and 3 cold little portions of various Mediterranean foods. Then came the mains - a tough steak, a chicken kebab more fat than chicken, a lamb shank again chewy and fatty, a chicken breast and a lamb kebab. I personally don't like fatty meat and this was mostly fat, all they're meat here in every restaurant seems to be rubbish meat so I have tended to live on fish and veggie dishes

Facilities
There are two big pools, one has activities throughout the day and one is just for relaxing. There is then a children's pool and a baby pool. None of the pools are heated and this time of year they are COLD! We were assured before we booked they are warm all year round, if we had known they were that cold we wouldn't have booked as we wanted a pool where we could swim our 7 month old but we couldn't.

There are plenty of sunbeds and management quite rightly will take up towels if people put them there before 9am. Unfortunately we had a run in with a certain nationality you might guess which who claimed we had stolen their towels and sunbeds! It might be an idea for management to leave a note to state towels have been confiscated rather than let innocent guests have to fight their corner!
Posted by Unknown at 09:01 No comments: