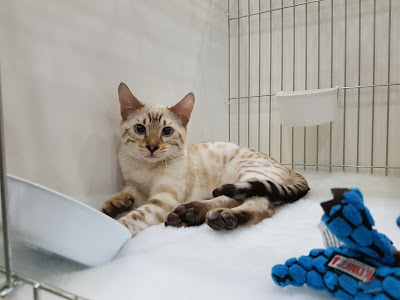 I decided I wanted to enter some cat shows to learn more about the Bengal breed and the standard judges are working towards and what they were looking for.  What they thought of my cats etc.  If I am breeding I feel I need to know more, I know what I need to be testing for health wise, they are all genetically clear for a couple of issues bengals can suffer with (kidney problems and eyes).  When they are old enough they will be heart scanned, so all those boxes are ticked, I just feel I need more ‘real life’ experience of what is going on in the Bengal world!  I had entered a show in July but Spec broke her tail the week before, so I entered the Wyvern show in the hope her tail had healed, I also entered Solly for experience as he is a little shy and needs to get used to being handled.

I had found the schedule out and entered a breed class for them each along with 3 side classes each for them.  It is quite easy to understand the schedules and entry forms, I did have to look up their breed/colour code though for the entry form.  The night before the show I clipped their claws, people always say their cats hate this but mine are fine.  I have a tube of squeezy cheese or pate which my husband feeds to them whilst I go round their claws clipping them, I don’t tend to need to do their back claws as they stay short so it is just the claws on their front feet.  They don’t like their ears cleaned though, I can do them quickly while they are at the food so I have to do a little bit at a time.  I gave them a quick brush and that’s our preparation done!  I gathered all our ‘stuff’ together so that I can just pack the cats in the morning.  I had two pieces of white vet bed, 2 litter trays, 2 water bowls, 2 feed bowls, a water bottle, cat food, cat litter, brush, ear/eye wipes, disinfectant wipes, their vaccination certificates and a trolley to transport everything!  Never would have thought you needed so much.

Show Day!
I decided to get to the show fairly early so I could settle the cats in. So I got there at 8.15 (it opened at 7.30 and closed 9.15 I think).  There wasn’t much of a queue, I just followed what everyone else was doing so I went to the first table to get our little card which you then take to the vetting in table and the vet signs to say they are okay.  I was concerned about Spec’s vaccinations as they are in her passport and it’s difficult to understand what is what, the vet didn’t know either so she had to ask the main vet who said everything was okay.  So both cats went back in their boxes and the card was signed.  I looked at the card and assumed the number by each cat was my pen number so I went off to find the pens.  I found Spec’s pen first, wiped it all down and put her bedding in, litter tray, food, water and a toy followed by Spec.  Off I went to find Solly’s pen which was a little way away from hers.  Once the cats were in, Spec looked quite happy but Solly seemed a little overawed by it all so I went to a stall to by a feather teaser.  I spent a bit of time with him and he gradually came round and seemed to feel happier.  I walked over to Spec’s pen and played with her a little, she didn’t seem fussed in the slightest and I thought she would freak out!  At 10am we’re asked to leave the hall so the judges can judge the breed classes, you have to remove food from the pens and any toys.
I waited patiently, had a couple of coffees, gave in to an adult colouring book and did a few puzzles. 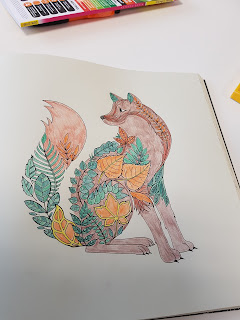 At 1pm we were allowed back in but they were running late as they had lost a cat in a mechanical seating set up that sort of looked like a false wall!  So Solly’s breed class hadn’t been judged, Spec’s had and she had a lovely big 2nd place rosette.  When I entered her I didn’t expect her to do that well as had been told GCCF aren’t keen on the dark colour, but I had checked with the office before and they had said I am okay to show her as she is registered as a seal lynx nothing more.  Her side classes were done and she had two firsts and a third in those, I was really pleased but super disappointed just to get place cards, people said you do normally get rosettes for the side classes, the entry fees are expensive, you are talking almost £50 a cat so I did expect a bit more. 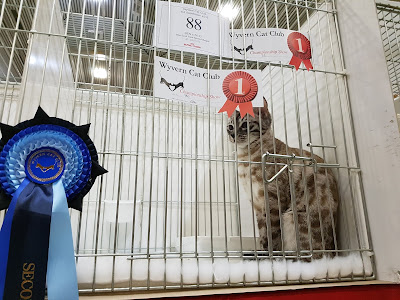 Solly’s results came in and he had a 3rd in breed (judge said he was just a bit young compared to the other kittens) along with a couple of 2nds and a 3rd in the side classes.  However he didn’t get any rosettes as they weren’t giving anything for 3rd. 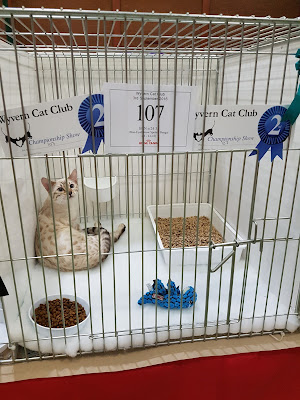 This show was also doing little rosettes that had ‘I like your cat’ written on them and the idea was you go and put it on another cats pen (not your own which I saw people doing!)  I thought it would be fair to put mine on a different breed, I have always liked Tonkinese so I put mine on a particularly lovely Tonkinese’s pen which actually ended up winning several big rosettes.  Someone put one on Solly’s pen so at least he did get a little rosette lol! 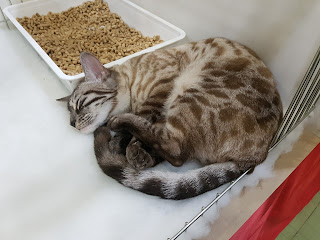 I was pleased with those results given it was their first show and Spec is only just out of kitten and Solly is still only young.  What I was impressed with was how they coped, Spec just loved it, she was so chilled out which I would never have expected as she is so naughty at home.  Solly got used to the environment and relaxed nicely too.  Some cats really don’t look like they are enjoying it and you do have to wonder whether it’s fair on them, I didn’t think I would show Spec again but she loved it so I will enter her in another show.  Tweed needs to mature a bit before she goes to a show but I know that she won't find it stressful as she just loves attention and is a really confident kitten so I don't feel I need to rush her into the show ring.
Posted by Unknown at 11:03 No comments: