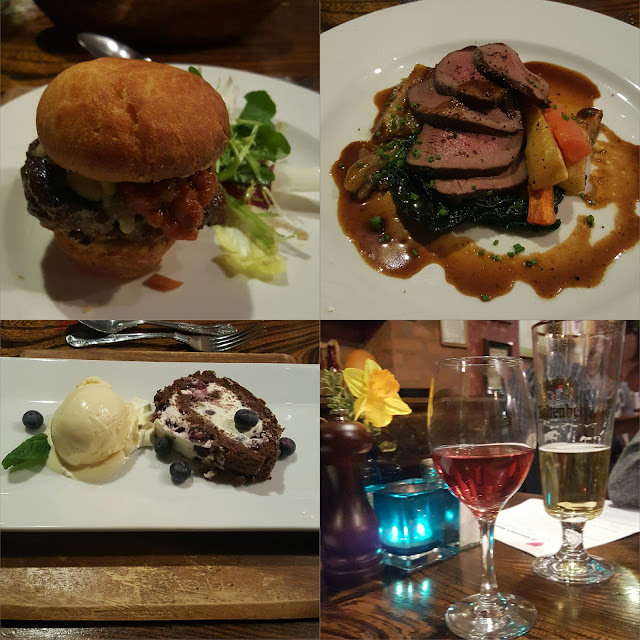 The Hundred House is a local favourite of ours, it has 2 AA rosettes and prides itself for using local produce as well as herbs from their beautiful gardens.  We had gone in for a bite to eat earlier in the month and seen the game night advertised, being a big venison fan we booked it.  The price was £26.95 for three courses including bread.


Mark and I had the same starter of Mini Beef & Venison Burger, Moydens 1665 Smoked Cheese, Dill Pickle Relish served in a Brioche Bun.  The burger was really tasty and juicy, with a relish that complimented it perfectly, my only gripe about the burger was the brioche was a little dry.
For main course Mark had Wild Boar Faggots seasoned with Thyme & Parsley, Braised with White Wine Tomato, Beans & Bacon, as Mark said they weren't just faggots, they were really tasty and juicy with perfect accompaniments.  I went for Roast Hauch of Venison, Turnip & Prune Gratin, Cavolo Nero, Juniper & Port Wine Sauce - I know venison for starter and main, it is my favourite and you don't see it that often so I have to make the most of it when it's there!!  This was beautiful, the venison was cooked to perfection and sliced lovely and thinly, there was just enough sauce - quite often in some of these restaurants they just drizzle a little on to make it look pretty and there is never enough.  Here, there was enough to make it look good (ie not flooded in sauce) but also enough to taste good.

For dessert we both chose the same which was Rich Dark Chocolate & Blueberry Roulade with White Chocolate & Mint Ice Cream.  The desserts at The Hundred House have never excited me, we have probably been at least 10 times and never once have I seen a dessert that jumps out at me on the menu and I am a dessert person.  The choice was this, apple pie or pannacotta.  This was nice but it wasn't amazingly tasty like the starters and mains tend to be, the ice cream was very good and I am not normally keen on ice cream but the roulade was just a roulade and nothing special.

It was a lovely night, nice food, cosy fires - looking forward to game season and another game night as we will be back again!
Posted by Unknown at 10:12 No comments:

Here's the photo from the awards night - thanks West Midland Safari Park! 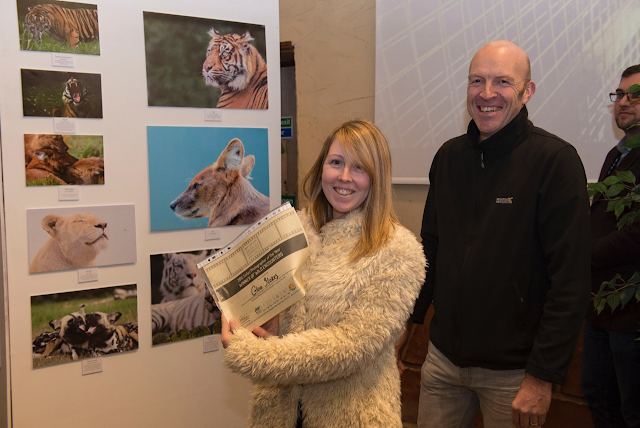 I had a good start to the new year last week as I had entered the West Midland Safari Park Photographer of the year with the below photo: 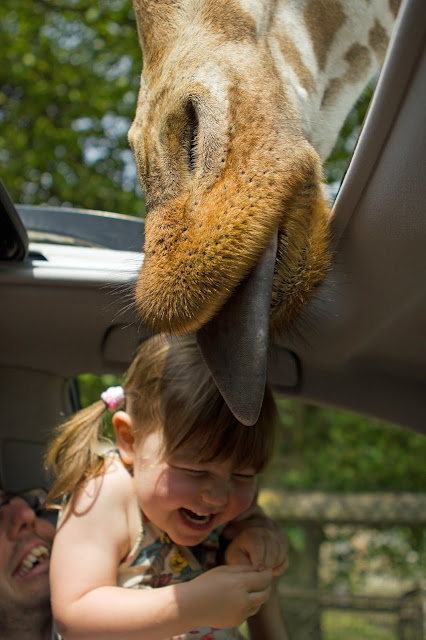 We entered the 'Wild Encounters' category and the awards night was last Friday.  The photo had been shortlisted a couple of times to eventually get through to being a finalist, which also meant that whether we won or not it will be exhibited at the Safari Park.  I am please to announce we won our category :)  Really pleased to have won and didn't think we would as there were so many fabulous entries and mine looked over exposed at the exhibition I thought! 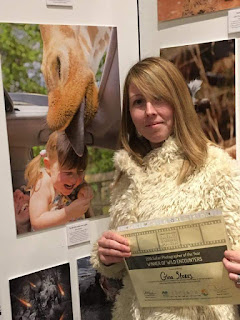 December has been an awful month!  We have rebuilt our house this year, we bought a bungalow we planned to extend but when we looked into it we found it was riddled with damp and we were better off knocking it down and starting from scratch.  Our deadline for completion was Christmas.

So of course we were running behind schedule, the tiler we employed did an awful job so we sacked him and it now became Mark's job.  All the trades were busy in the run up to Christmas so we couldn't get anyone in, the tiler really messed us up the most as it put us a lot further behind schedule.

Luckily business is quiet in December so it meant we could be there most days and we did manage to get it in a liveable condition and Mark managed to get the stairs in with the help of family on 20th so we moved in on 21st.  All be it without doors, skirting (any upstairs electrics/lights - another trade that screwed us over, the electricians).

Our Christmas tree went up after lunch on 22nd, it is a beautiful 10ft tree and I just had to put it up, seems such a shame we couldn't have finished earlier and it have been up longer as it looks stunning.

What I would say is, if you can afford it have your builder do everything.  The project management was fine but it is the trades you are employing, you don't know them, even people who recommend them, are well reviewed, have years of experience etc  They still mess up!  They don't care really, they take your money and they are gone.  If the builder employs the trades, he has a relationship with them already, he knows them, has worked with them so they aren't going to mess up are they?  If they do it's the builder's responsibility.  If we do this again we will definitely do it this way or we just won't do it.

Anyway we are in, things are slowly getting finished and we enjoyed Christmas and had a NYE party, it's a good job our settee hasn't arrived as the lounge made a great disco!  I had bought Macy a disco light bulb for Christmas, it's great as it fits like a normal bulb but it spins and throws all the pretty lights down. 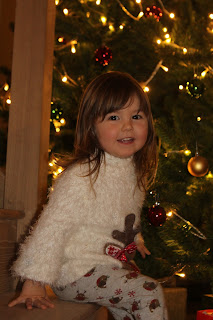 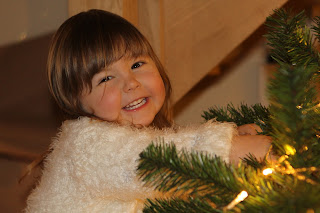 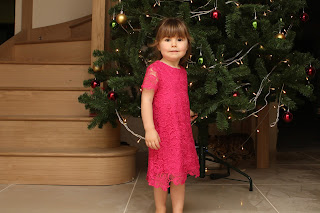 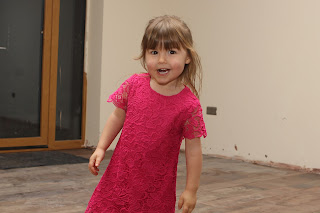 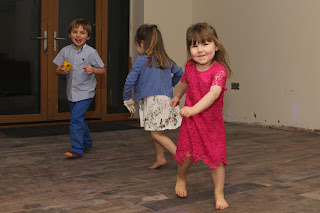